An engine is only at peak condition once in its service life: at delivery. From the first operation on your aircraft, in-service wear of its different components begins reducing overall performance. This decreased efficiency results in additional fuel burn and costs – which significantly impact your bottom line. Although engine maintenance is designed to keep an engine functioning safely throughout its service life, there are many factors that drive when it must occur. Understanding these factors is critical for evaluating when to schedule maintenance, and the purchase or lease of any new or used engine. Let’s examine these in more detail, and how AerSale® can help keep your fleet’s engines flying.

The most important parameters for understanding an engine’s condition is the exhaust gas temperature (EGT) and EGT margin. Understandably, maximum EGT margin is found only on new engines.

An engine gradually increases its EGT at take-off as its performance deteriorates. Take-off level thrust is maintained by injecting more fuel into the combustors. As the EGT margin is reduced by the engine’s accumulated time and cycles operated on wing(typically, one start, take off, and landing), engine maintenance is required – which brings a large part of the EGT margin back, but not all. Depending where an engine is in its life, there will be core engine material replacement and might also be life limited parts (LLPs) replacement scheduled at the same time. 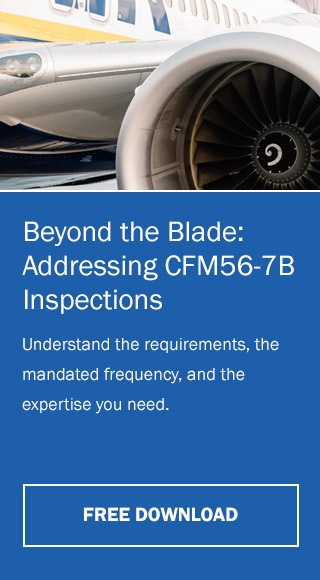 Depending on the engine type, it must be dissasembled, cleaned, and serviced every 3,000 or more flight cycles. This means an engine receives a major overhaul every five years, in addition to more frequent, less invasive maintenance. Since engine manufacturers and regulatory agencies put limits on parts that spin at thousands of revolutions per minute and are subject to extreme temperature changes, these are required to be removed and replaced at specific intervals when their useable life is consumed. They cannot be overhauled or rebuilt – and there is a difference.

The consumption of LLPs dictates when engines must be removed from an aircraft, drives maintenance requirements, and can impact fleet uptime. An important part of planning for engine maintenance is managing the different intervals when parts of the aircraft’s engines need replacement. Additionally, understanding when a new part or a continued-time part is the best option can significantly reduce overall maintenance costs.

When considering engine maintenance, there are two primary-use criteria that are central: engine flight cycles (EFC) and engine flight hours (EFH). These are dependent on the type of flying the engines perform, such as short hops in a hot and dusty environment or on longer flights in a colder climate with clean air.

For short-haul engines the most important parameter is the EFC. This is due to the engine’s high temperature exposure during take-off being the most stressing event for the engine.

For long-haul engines, the EFH is more important, as the erosion and contamination of the engine gas paths can be more problematic during long flights rather than the infrequent takeoffs.

AerSale understands these and other critical variables that impact your engine’s condition and availability. As a vertically integrated maintenance, repair, and overhaul (MRO), AerSale has many options for your fleet’s engine requirements. As the single most expensive component on your aircraft, you need flexible engine options. AerSale provides a full array of choices for spare engine coverage including aircraft engines for sale, lease, and exchange, as well as jet engine parts.

As a global aviation leader celebrating its 10-year anniversary, AerSale specializes in the sale, lease, and exchange of used aircraft, engines, and components, in addition to providing a broad range of aviation MRO services for commercial aircraft and components. AerSale also offers asset management services to owners of end-of-life aircraft and engine portfolios. Headquartered in Coral Gables, Florida, AerSale maintains offices and operations in the United States, Europe, and Asia. For more information on how AerSale can keep your aviation assets working for your profitability from first flight to final flight, visit www.aersale.com.