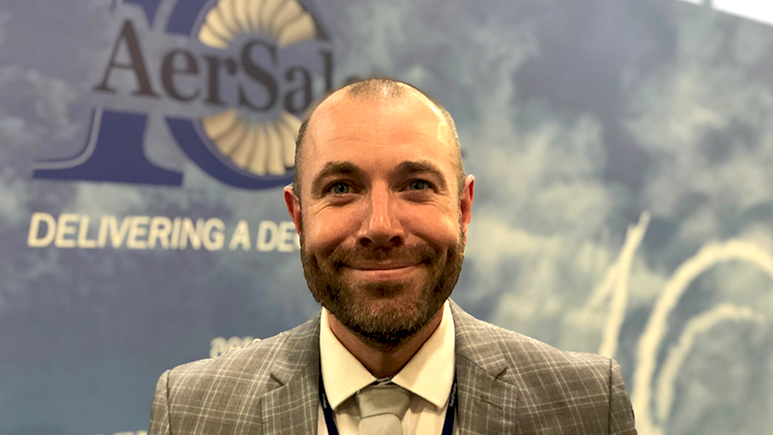 The series continues, with posts featuring the longest-term employees of AerSale®. In celebrating the company’s 10-year anniversary, we are highlighting what each of them remembers looking back and what they see for the company going forward.

Ten years ago this month, Damon recalls attending a conference and being approached by Bob Nichols and another man who would ultimately become his boss at the newly developing AerSale organization. The two conveyed their vision for the company, discussed the current state of affairs, and asked if Damon and another friend of his in attendance had any interest in joining them. Damon’s impression was that AerSale was a bit of a pipe dream, but he and his friend continued to stay in touch with Bob and his colleague. By January 2010, they were both on board.

Damon speaks about the opportunity AerSale represented, saying he was somewhat glass-ceilinged at this previous employer. AerSale provided the springboard for both his professional growth as well as growth within the aviation industry, but he firmly attributes Bob Nichols’ sales pitch of AerSale as the clincher.

“Bob could sell a glass of water to a drowning man,” Damon says. “His charisma and enthusiasm make you feel like you can run a marathon after you speak to him. He single-handedly sold me on the dream of what AerSale would look like in the future, and I wanted to be part of it.”

What happened next will remain forever ingrained in his memory. Damon and his friend interviewed together, at the same time, in the AerSale boardroom with Bob, Nick Finazzo, and Damon’s future boss. He describes the interview as an hours-long, very odd series of events—much of which would be inappropriate to repeat—but that took some comical turns. The candidates were asked what they knew and what they didn’t know. The friend was asked to put his feet up on the desk to better display his funky socks and painted shoes. Yes, a bit unusual. But when Bob asked Damon what he didn’t know, and concocted an off-the-wall analogy to help, Damon couldn’t hold back any longer. He burst out laughing, which triggered a chain reaction of laughter from everyone in the room. Except Nick. (Gasp!)

“He had a completely stern look on his face,” recalls Damon. “He just looked at us and said, ‘Don’t encourage him!’ I bit my lip so hard it bled.”

His willingness to shed blood for the company must have sealed the deal. Damon and his friend were hired on the spot.

As Director of Sales, Damon started with a blank slate and was mainly focused on selling the UPS inventory AerSale had recently acquired. Engines were the hot ticket at that time. There was no plan for the airframes. Yet. It was a quest on a global scale to find more engines, perform cost modeling, and develop an entire customer base from scratch. To say he traveled extensively is an understatement. Picture something more akin to “Planes, Trains and Automobiles.”

“Busy” is a lackluster attempt to describe the flurry of activity during AerSale’s infancy. The company was practically an unknown entity in aviation and required exasperating efforts on the road and in the skies. The rewards were exponential as every customer was a new one and every individual sale helped to build the behemoth the entire AerSale team believed the company would become.

Certainly Damon has witnessed an amazing transformation. With the combination of organic growth and ongoing acquisitions, headcount has increased and there are always new names to learn and faces to recognize. AerSale continuously makes waves in the industry and has earned a renowned reputation. It’s now a challenge to find an organization in the industry that doesn’t know the AerSale name.

“I have the great pleasure of working every day with some of the most unique characters—who are at the same time brilliant minds in aviation,” says Damon. “With this phenomenal team, our ever-increasing acquisition of assets and other companies, and expanding services, we are becoming a one-stop solution for all customers. Today it’s actually easier to state what we cannot offer, versus what we can.”